Meet at 2.00 pm (Melway ref 21 H6) at the parking area below the Eltham Community and Reception Centre at the western end of Pitt Street.

The watercourse now known as Karingal Yalloc was once called the Eltham West Drain. It enters the Diamond Creek near Brougham Street, Eltham and drains an area extending to St Helena and part of Greensborough. The creek has been undergrounded through part of the Eltham industrial area.

In 2013 we explored this creek upstream from Meruka Drive. For our March excursion we will follow the creek as closely as possible from the Diamond Creek to where it crosses under the railway line near Sherbourne Road. This is mainly through the industrial area and we will discuss Eltham’s industrial history along the way. A particular feature is the former hat factory (Fort Knox Self Storage) at the end of the walk.

The distance is less than 2 km one way and should take about two hours, including plenty of time to stop and talk. There will be an informal return walk but those who wish to can catch a bus back.

The walk is open to Society members and the general public. Dogs are not permitted on Society excursions.

All are welcome…..but numbers are limited 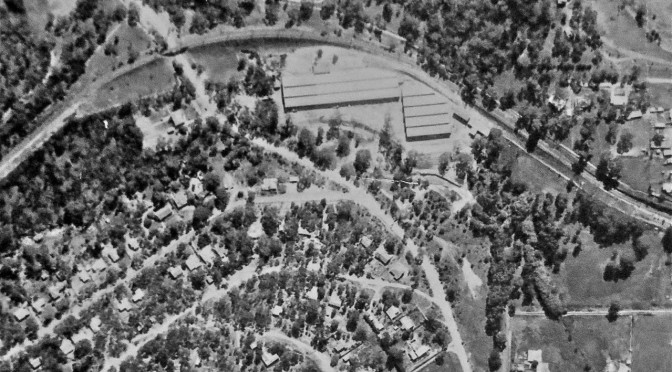 A former hat factory in Sherbourne Road Eltham has in the past been used for various purposes and a self storage business currently operates from these premises.

The Karingal Yallock Creek passes through the front of the land and the creek environs are the subject of significant and unusual landscaping works, including some cascading water channels. Some of the landscaping was damaged by the Christmas Day floods of 2011, but the main elements remain intact.

The landscaped area (as distinct from the factory itself) is the subject of a Heritage Overlay under the Nillumbik Planning Scheme. The basis of this overlay is a Heritage Report by Graeme Butler and Associates in 2006. As well as an assessment of the landscaped area, it includes one background information on the history of the site (although a complete history would require more research).

The site was part of Crown Portion 3 of the Parish of Nillumbik that remained as the Montmorency Farm until early in the twentieth century. The 1911 subdivision of this farm created Lot 7 of some seven acres, which is the site of this factory. The Heritage Report lists the various owners of the site. From the rate records and aerial photos it is concluded that the site was used as an orchard and farmland until the 1940s. William F Crellin, orchardist, owned the site from 1912 to 1923. Then Edmund Williams owned it until 1951.

In 1955 the site was owned by Rupert V. Kirsch and this is the name anecdotally associated with the hat factory, where the well-known brand of Fayrefield Hats were manufactured. There is some belief that this was built about the time of the Second World War and that hats for the armed forces were made there.

The featured aerial photo from the early 1950s held by the Society shows that part of the factory complex had been built then.

Other reference items of interest include:

The Hat Factory – a personal recollection of the hat factory and followup feature on the gardens, Hat Factory Revisited

The fish pond which was part of the landscaped gardens emerged into the Victorian skateboarding scene in 1977.

A series of eight photos showing various internal views of the hat factory and staff members at Christmas 1959, held by the State Library of Victoria, can be accessed via Trove