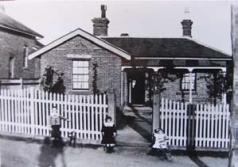 The former police residence at 728 Main Road, Eltham was built in 1859-60 to house the local police officer, with the first occupant being Constable Peter Lawlor and his family. This building is on the Victorian Heritage Register and is considered to be of state heritage significance as the oldest public building in Nillumbik, after the adjacent Court House, also built in 1859-60. A single stall brick stables building with a loft was also built in the rear yard, but has been substantially altered since. The original two-cell bluestone lockup, located where the rear car park now is, was demolished in the 1950s. Some of the bluestone blocks have been used as edging for garden beds.

Police activities ceased about 1952 when a new police station was opened in central Eltham. The residence was then used by the State Lands Department, followed by a Community Youth Support Scheme and later for the Shire of Eltham Parks and Environment Section. 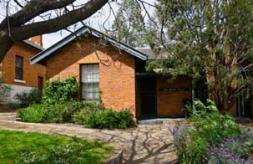 Since 1998 our Society has appreciated occupying this former residence for our Local History Centre as the base for our operations and to house a range of local history resources, records and documents.

During the last six months we have undertaken a substantial refurbishment and reorganisation of the premises and to celebrate this achievement we will be holding an Open Day and official ‘reopening’ on Saturday 4th March from 2.00pm. Society members and visitors are invited to visit, browse around and explore some of our local history.

The format for this meeting will be a local history trivia quiz based on pictures from the Society’s collection or present day pictures taken especially for this quiz.

As we commence our 50th Anniversary year the focus will be on Society achievements and activities, but perhaps with some othericky questions to confuse participants. An early significant achievement was participation in the collection of historical photographs for “Pioneers and Painters” now known as the Shire of Eltham Pioneers Photograph Collection, so of course some questions will be based on photos from that collection.

Participants can work individually or in teams of up to four people. Forms will be provided setting out the questions with space for written answers. There will be a prize for the winner or winning team. Quizmaster will be Russell Yeoman.

This light-hearted meeting will be held at 8 pm on Wednesday 8th February in the Eltham Senior Citizens’ Centre, Library Place Eltham. All members and visitors are welcome to attend.

As at all of our meetings, new members and visitors are most welcome.

A word from our Society President, Jim Connor.

While there have been many changes in the 50 years since 1967, the year our Historical Society was established, 50 years is not such a long time………in historical terms.

It is however a significant milestone for our small not-for-profit historical group, a milestone to be appropriately acknowledged and celebrated. We can remember our past and value our present, as we encompass our future.

Much has changed since 1967, the last year Harold Holt was Prime Minister, when Henry Bolte was the Victorian Premier, La Trobe University was officially opened, the Postcode system was introduced, Heidelberg Historical Society commenced and in June the Beatles released the Sgt. Pepper’s Lonely Heart Club Band album, considered by Rolling Stone magazine to be the most important rock and roll album ever made. June was also the month the first meeting was held to establish our Society.

Since that time our Society has been actively involved in many activities, excursions, meetings and initiatives to support recognition of our local history. We have been, and are part of the social and cultural fabric that makes up our community. We, and other like groups, value our history and we continue to encourage the broader appreciation of the historical elements within our district, that once gone can never be replaced.

During this year we will look back to consider those individuals who helped establish the then Shire of Eltham Historical Society, now known as the Eltham District Historical Society. They set a course that has led us to where we are today.

Along the way there have been many, many people who have contributed their time, skills, passion and commitment to support our Society and to ensure it has continued to present, value and express the importance of protecting our heritage and maintaining memories of the past, our significant local history.

Now an appropriate question is…where do we go from here? No doubt this will be one of the many discussion points during 2017, our 50th Anniversary year.

To catch up with what is happening during our 50th anniversary year, our 2017 Program is now available to download directly from here or via the menu links.