According to a correspondent in ‘The Argus’ on Saturday residents of the Eltham district are desirous that the morning trains from Eltham should arrive at Melbourne an hour earlier. It is also contended that the time occupied on the journey on weekdays should be reduced to about the same as that taken on Sundays. It is stated by railway officials that some time ago a number of residents requested that the train which was due to leave Eltham at 7.33 a.m. should be started an hour earlier. Regular travelers who had made their business arrangements in connection with this train were consulted by the department, but as the majority of them were strongly opposed to any alteration of the time-table no further action was taken. On Sundays trains ran through to Eltham, and, as there was no transference of passengers at Heidelberg, the journey was naturally covered in a quicker time than on week days. When the new station at Heidelberg was built however, there would be very little detention. 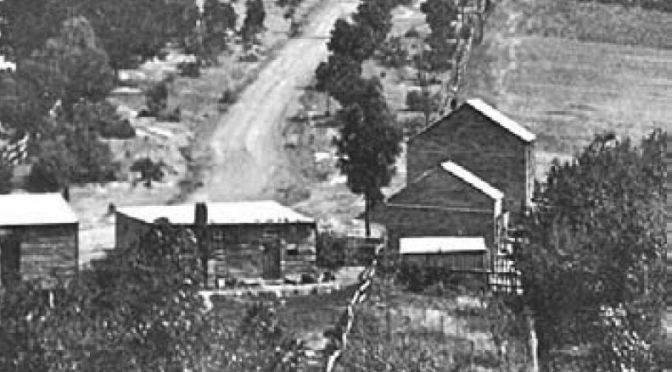 This photo is an enlarged section of one from the Reynolds/Prior collection held by our Society.

The two story building in question was located where ‘Plum Tree Creek’ is now located or alternatively at 14-16 Ingrams Road, Research.

Since early August 2014 there has been debate on the ‘Lost Research’ Facebook site as to what the building was. Whilst many ideas have been thrown up no definitive answer has been given that can identify the building’s use.

Can you help us?

In early 2007 the Australian Newspapers Digitisation Program was launched.  The National Library of Australia, in collaboration with Australian State and Territory libraries, began a program to digitise Australian newspapers for access and preservation purposes. By May 2009 Trove had been launched as a resource for information about Australians for Australians. It includes digitised newspapers from 1803-1954, The Australian Women’s Weekly to 1982, journals, articles and datasets, books, pictures, photos, objects, music sound and video,  maps, diaries, letters and archives, archived websites, people and organisations and lists.

The site uses electronically translated text and as such there are some errors, so for this reason think about your search strategy and possible spelling variations when looking for your subject of interest.  Once registered, a researcher can correct text.  Local news was reported widely so don’t restrict your search to local newspapers only.

This site continues to grow and has become the major online resource for Australian history.